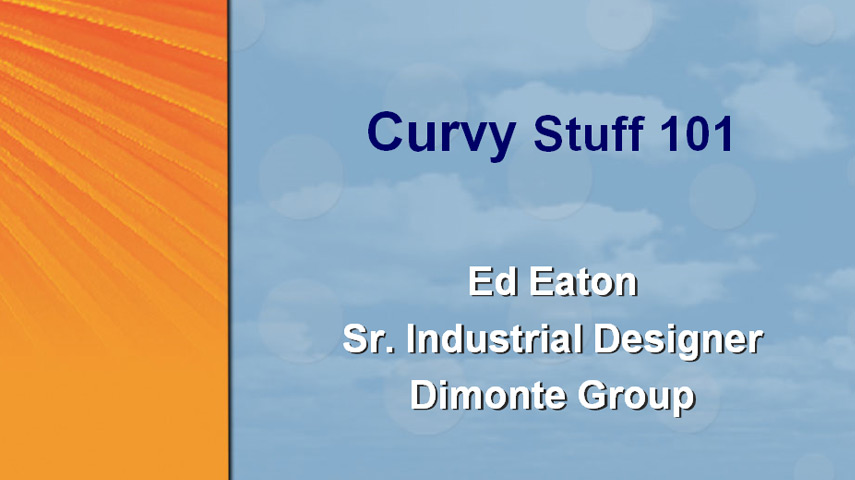 “Out of date” alert: Though I tested everything thoroughly at the time this was authored, please note that many items in this presentation have been made out of date by subsequent improvements in SWx (notably the guide curve stuff and most of the stuff on ‘dome’, though there are others).

As with any presentation you attend or subsequently find online, be it mine, someone else’s, or even God’s, don’t take anything on faith – test everything out for yourself!

We all make mistakes or wrong assumptions, and SolidWorks continues to evolve.

Inspiration: Like everyone else using SolidWorks in the late 90’s/early 00’s, I was struggling to try to figure out how the core SWx curvy features really worked. At the time, all we had to go on was spotty, sometimes conflicting, and occasionally (and disturbingly) false resources from training, SolidWorks corp, Vars, and user groups.

This has not been eliminated over time, by the way – in spring of 2007 I went to a VAR presentation that gave wrong advice over and over again about modeling curvy stuff (they presented things that simply did not work, even when the Var demo-jocks tried it on screen, yet they pretended that it did despite the evidence in front of them – or excused it as a quirk. It was surreal. My policy is if it doesn’t work, it doesn’t work. so let’s find out how to make it work).

In those early days I dove in to reverse engineering SolidWorks and test everything that I could in the curvy features so I could somehow model the shapes that I needed for my job. After working a lot of it out, it seemed like a shame that every other users would have to go through the same laborious testing process, so I took additional time to document and present my findings. Good thing, too – I personally gave this presentation to developers at SolidWorks in Concord and subsequently some of the more painful bits have been dramatically improved or even removed from the software.

Abstract: This presentation goes beyond the tutorials and takes a detailed, deconstructive look at the set-up, application, and capabilities of SolidWorks organic modeling features in SWx 2001+.

Benefit: In this session, attendees learn how to overcome the feature-level issues that frequently prevent users from developing the organic shapes they require.