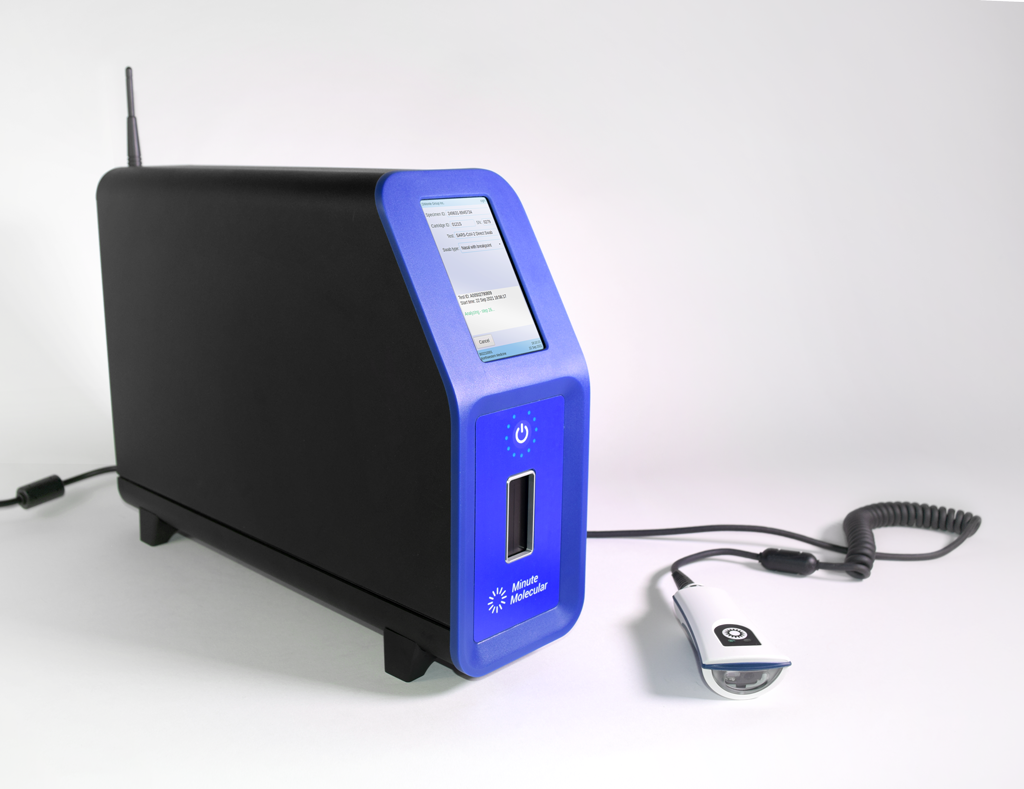 Up until now, you had to make a choice with COVID-19 diagnostic tests: rapid or accurate. But now DiMonte Group is proud to announce we’re playing a major role in the design of an analyzer that completes the most accurate form of COVID-19 testing with results in about 15 minutes.

Rapid tests work by detecting the presence of viral proteins called antigens. The instruments are compact, so tests can be performed outside a laboratory, and produce a result in about 15 minutes. However, the speed comes at the cost of sensitivity. Rapid tests are reliable when the individual has a high viral load. They are prone to false-negative results if a person has lower amounts of the virus in their body.

The gold standard for viral testing is polymerase chain reaction, specifically RT PCR. In RT-PCR, first the viral RNA is copied to DNA using a special enzyme called reverse transcriptase (RT). Then, using test reagents including DNA polymerase, copies of the viral DNA molecules are produced. These copies are then copied, and so on until millions of copies of the DNA are produced which allows for the identification of the virus. However—up to now PCR testers have been large laboratory machines, slow and expensive. These machines are often only available at testing laboratories, so patient samples are sent out by courier and the results come back in a day or two. This can delay critical treatment for a person who tests positive, and risks spread of the virus to others during the wait.

Here’s a photo of the M2Dx DASH, which is both rapid, and accurate: 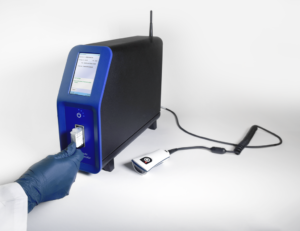 In a DASH test, a patient’s sample is collected with a nasal swab. The swab is inserted into the DASH single-use cartridge that contains everything needed to complete the test. The healthcare worker snaps off the swab handle and inserts the cartridge into the door on the front of the analyzer. The analyzer runs the complete PCR test automatically. First, the virus is lysed, and the viral RNA is purified using biochemical reagents preloaded in the cartridge. Magnetic particles concentrate and transport the viral RNA through the extraction steps to the PCR amplification and detection chamber. The viral RNA is first converted to DNA enzymatically, and PCR is performed with two pairs of fixed-temperature heaters and a four-channel fluorimeter that move as a unit. As each DNA molecule is copied, a fluorescent dye molecule is liberated, generating a fluorescent signal. Fluorescence intensity is monitored at each PCR cycle utilizing LED illumination and solid-state detection. The fluorescence readings are interpreted via the test algorithm, and the result (positive/negative) is reported to the operator.

The innovation offered by the DASH is rapid, accurate PCR technology in a very compact instrument, suitable for a doctor’s office, clinic, or school nurse’s office.

For more information on how DiMonte Group’s growing team of industrial designers, mechanical engineers, electrical engineers, embedded software engineers, and Linux experts can help you with your next great idea, please contact us!